...at the heart of our arraying technology...

Today’s systems are often software-driven rather than traditional state machines.  We have invented numerous adaptive signal processing and advanced image processing algorithms which are at the heart of our capabilities.  Arraying widely-spaced sensors, for instance, requires specialized hardware which is controlled by the arraying algorithms run in software on high speed computers. These algorithm-driven systems enable flexibility and expandability.

Specialized Arrays principals have decades of experience in multi-signal recovery and characterization using both analog and digital methods.  Of particular interest are dense signal environments where the signal of interest is weak and dominated by co-channel interference.

Some signal environments, such as electromagnetic radio frequency (RF) or acoustic, are characterized by several or many signals simultaneously being received, drowning out one another.  In popular literature, this has analogously and loosely been called the “Cocktail Party” problem, where a distant whispered conversation one wants to hear is being overcome by loud nearby conversations and crowd chatter.

One of the more interesting and mathematically challenging applications of an array of sensors is to be able to recover just the conversation of interest, in the clear without the noise.  To make the problem even more interesting, suppose that it is unknown whether or not that weak signal is even present, but if and when it is, we want to pinpoint where it’s coming from as well as receive it clearly.  Even more generally, we may want to separate out and isolate each and every ‘emitter’ in that environment, without having any a priori information about who’s in the crowd and when they’re speaking.

Mathematically, we refer to this signal separation process as Blind Signal Sorting, or BSS, where the term ‘blind’ means that nothing is known about the signal environment.

The problem is to decompose the signal environment into its many independent components.  With an array of sensors, each simultaneously sampling the environment from different perspectives, each sensor provides a unique and different combination of the signals, in essence providing an independent set of simultaneous equations which can be solved for the unknowns.

Our interest is primarily in electromagnetic (RF) signals.  One of the simplest yet highly effective applications is to reject, or null, deliberate jamming signals interfering with a desired communications signal.  In this case, one usually knows a great deal about the desired signal, so a general BSS operation is not necessary.

At the other extreme, consider a surveillance application where one wants to know “what’s out there”.  Ordinarily, on the surface of the earth, transmit frequencies can be reused if the transmitters are far enough apart due to range attenuation (like cellular) or if they are beyond the (earth curvature) horizon for higher powered transmissions (like FM or TV broadcast), so ordinarily there is little co-channel interference.  If the surveillance sensor is carried above the earth’s surface, such as on an aircraft, emitters that were hidden by the earth’s curvature now are visible and interfering with one another.

An array with BSS processing can address this situation, separating the signals and providing unique phasing vectors, called “steering vectors”.  These steering vectors are applied mathematically in an input weighting and combining network to enhance a signal of interest and suppress all the others. Sometimes, a signal of interest arrives at the array indirectly, by scattering reflections which introduce severe frequency dependent distortions, often mixing in frequency dependent distorted interference.  Our frequency domain channelized BSS algorithms also address this situation

The above figure are the results of a simulation of an environment with three wideband interfering signals.  The frequency domain channelized BSS algorithm has correctly found these signals.  Using the steering vectors obtained, the co-channel signals can be individually received optimally, with all but the one of interest nulled.  Applying this process in parallel, all of the several signals can be recovered and made available simultaneously, in the clear, for further processing. 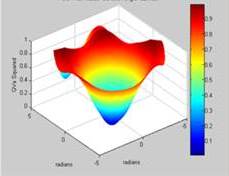 Using array calibration, steering vectors obtained by the BSS process can be applied subsequently to pinpoint a signal’s point of origin.  Our algorithm produces a mathematical minimum (above) at the most likely AOA (Angle-of-Arrival).  The value at the minimum contributes an AOA error metric with each emitter’s AOA, an important function that cannot be provided by widely known AOA algorithms such as MUSIC. 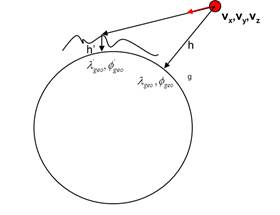 Additionally, we have decades of experience in multi-sensor data and image fusion.  ‘Hidden’ information can be derived using specialized arrays and various sensor technologies.  Some capabilities include:  3D data (LIDAR) alignment, fusion, and visualization; atmospheric correction of imagery; video object tracking; image registration; and image fusion.  Specialized Arrays recently proposed a novel LIDAR, video, and sonar system for the reduction of by-catch during trawling. More information can be found on the patent page.

High Fidelity modeling and simulation is the foundation of all our work.  With our analysis tool, potential system performance can be evaluated, beginning at concept, through design iterations, and in comparison, with the final operating system.  ArrayPro was developed in-house to model and simulate our inventions.  The same software used in this process can them control the hardware prototype by replacing simulated components with the real hardware.  ArrayPro integrates MathWorks’ Matlab and AGI’s STK and other packages.   Our algorithms are generated in MATLAB and are integrated with STK. 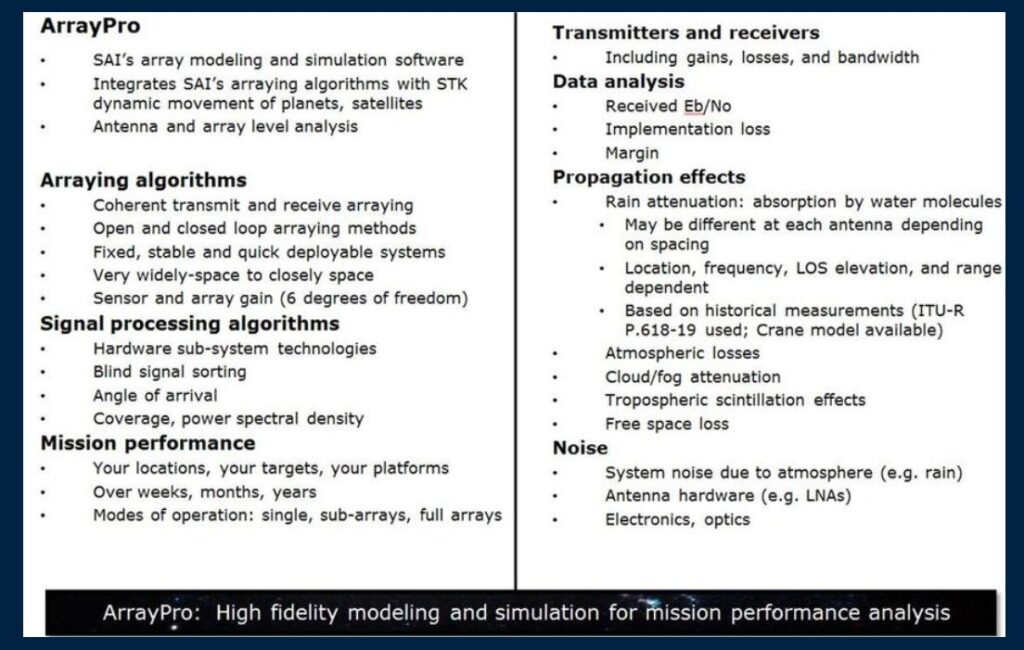 Below is an example of how our ArrayPro is integrated with AGI’s STK.  A wideband receive array was designed and simulated with 3 large ground reflectors at Punta Arenas, Chile. 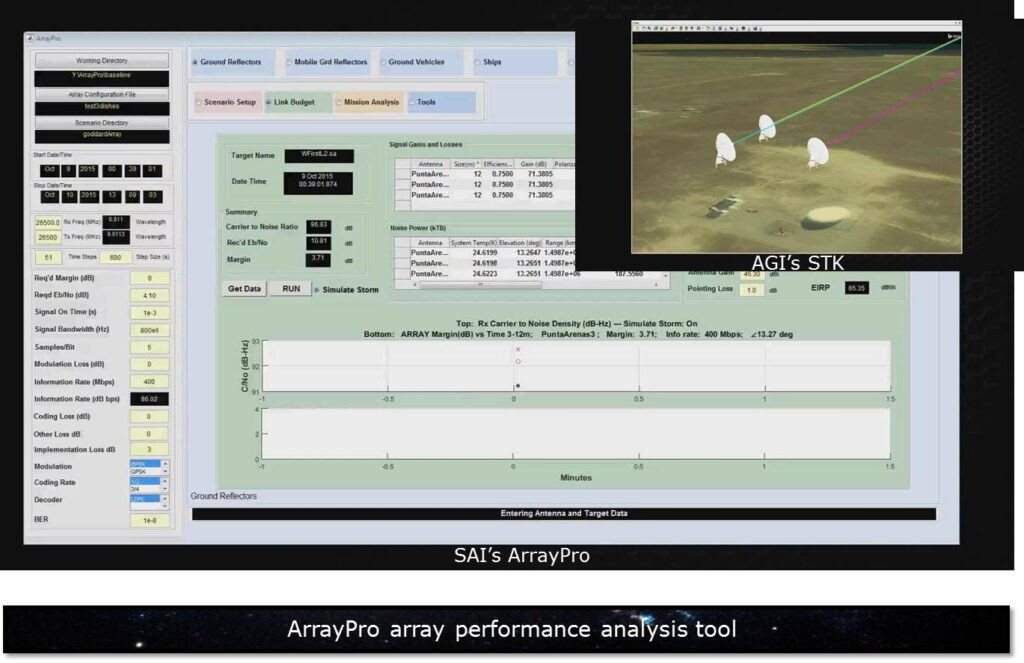 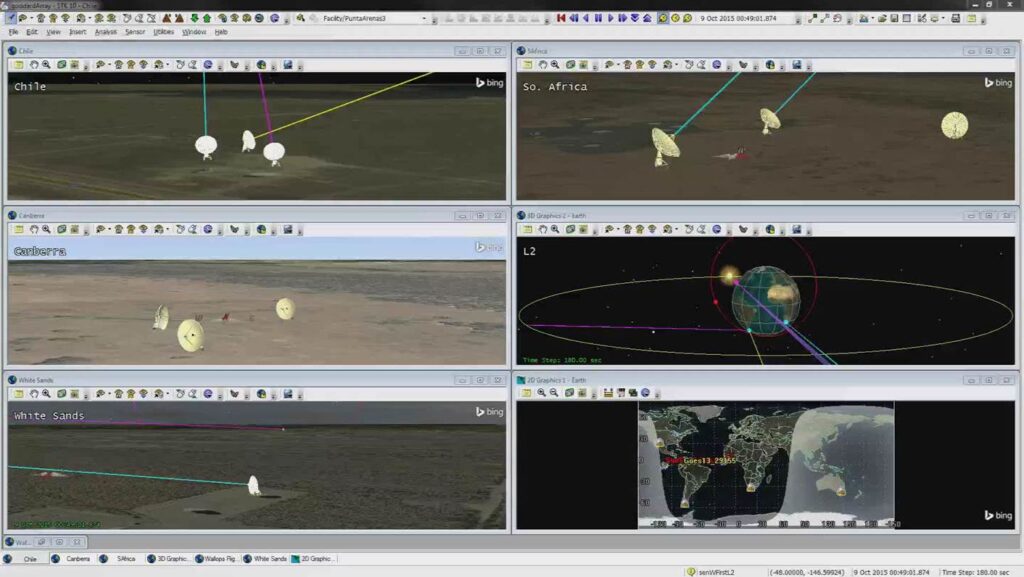