An array of small tactical antennas can provide the power and data rates of a single large antenna for on-the-move missions.

Resilient communications:    It may not be practical to install a large antenna.  The LEO (Low Earth Orbit) satellites may not be available.   These manpack antennas can potentially be arrayed to transmit directly to the GEO (~35.8km).   Just three antennas provide 9 times the power gain of a single antenna; eight provides 64 times, and 10 provides 100 times since the power gain increases by the square of the number of antennas.

Small antennas can be ad-hoc arrayed in rugged environments and autonomously synchronized for long range COMM, such as to a GEO satellite. The antennas are not connected for quick setup. Feedback from a reflective body such as a dead satellite or an ordinary downlink signal such as telemetry data can be used to coherently combine the signal so that it arrives at the target from each antenna at precisely the same time. 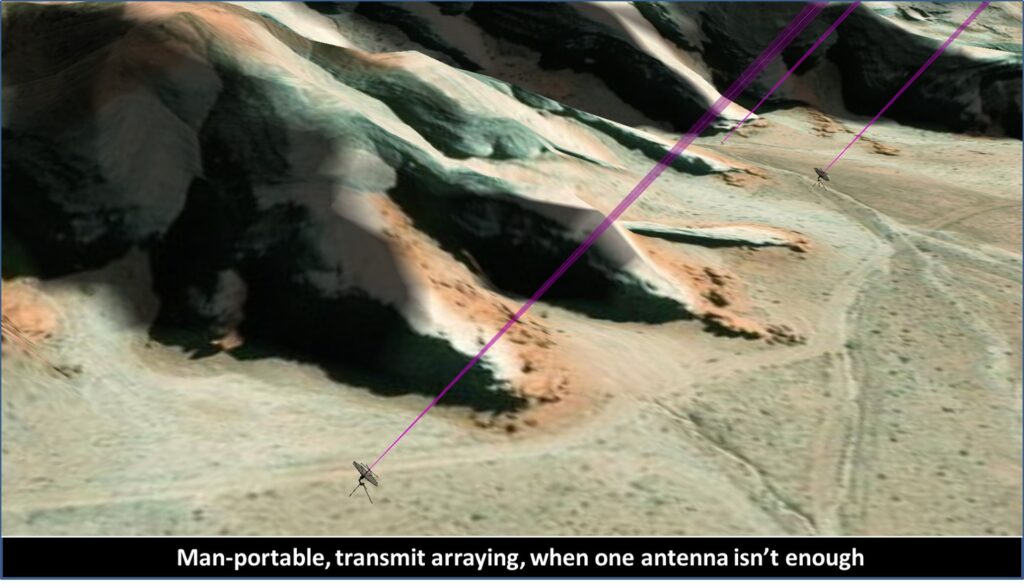 At times, a tactical mission may require high bandwidth directly to a COMSAT.  A comparable large antenna would be difficult to transport and set up and would create a high-profile target.  Alternatively, an array of small man-portable antennas, could be deployed.

The radiated power is distributed, mitigating discovery.  If one sensor fails, the others continue the operation thus providing built-in fault tolerance.

Additional antennas can join the array, given the knowledge of where to point, approximately when to begin and what to send.  Self-synchronization begins immediately.

For identical antennas, the array Effective Isotropic Radiated Power, EIRP,  is proportional to the number of antennas squared.  This means that only ten man-portable 1.2 m reflectors will equal the EIRP of a large 12 m reflector, given that the array HPA’s are the same power as that for the 12m antenna.